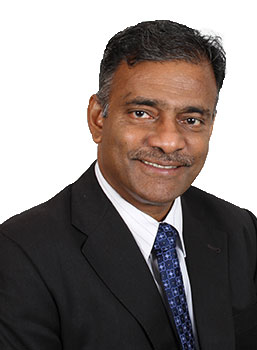 Dato’ Ir. Eelasegeran, aged 62, graduated from Loughborough University of Technology, United Kingdom, with a Civil Engineering (Hons) degree in 1981. He also holds double Masters Degree from UK –  MBA from Heriot-Watt University (1999) and Masters in Research (MRes) from University of Liverpool (2016). In addition, he is a Professional Engineer registered with the Malaysian Board of Engineers.

He joined Petronas, the Malaysian National Oil Company, in September 1981 and served the company for close to 32 years in various capacities until 2013. Appointed to senior management positions from February 2004, assuming the responsibilities of Country Head, Petronas Algeria and later in 2006, Country Head, Petronas Uzbekistan. As the company’s country head in an overseas location, the key aspects of the job included building and maintaining a wide network of business contacts and relationship. In particular, with the key host Government stakeholders to grow the business, enhance company image and promptly resolve business issues. In addition, the position also carried the full accountability for the company’s operations in country and the due performance of all activities, in particular development of oil and gas fields to enhance production. Upon retirement from Petronas, moved to the service industry and was with an offshore facilities provider in a senior capacity for a short while and thereafter have been a freelance consultant to the industry.