Enforcement of international arbitral awards in Islamic Republic of Iran 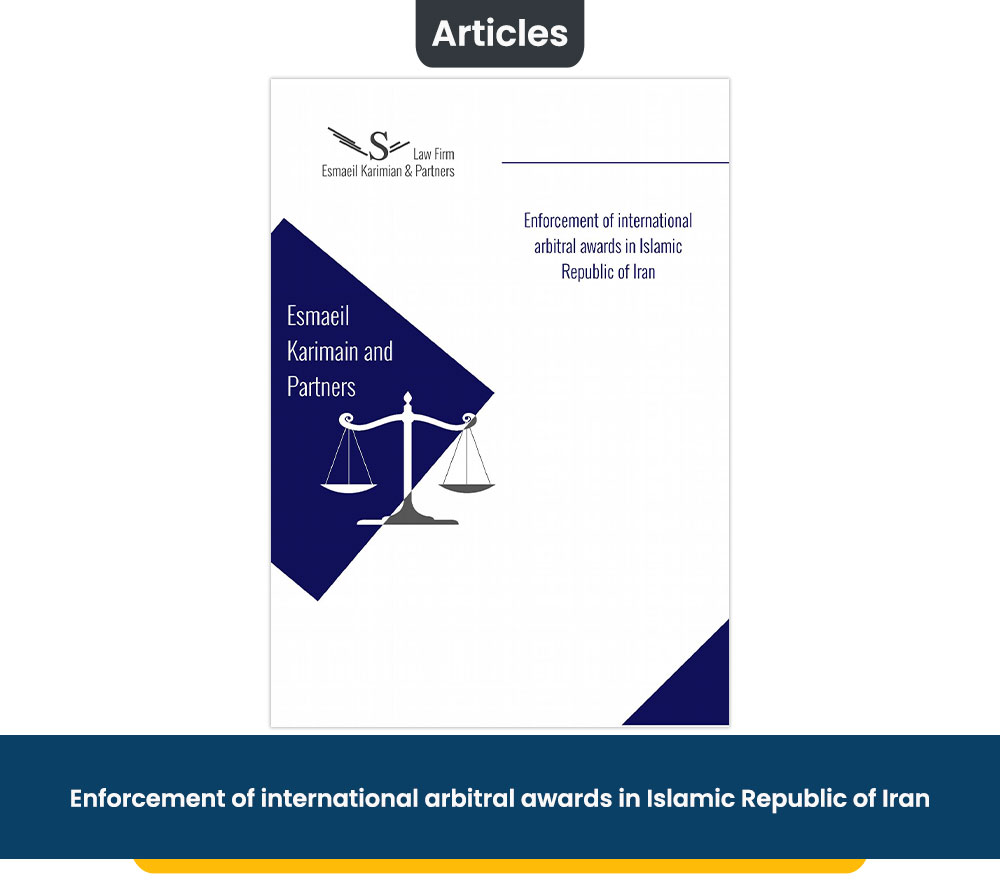 Enforcement of international arbitral awards in Islamic Republic of Iran

Arbitration is a kind of private adjudication by which parties to a commercial contract can resolve their disputes outside of any judicial system.
One of the main reasons of incorporating an arbitration clause in an international agreement is that parties can be certain about enforceability of the arbitral award. Many countries have adopted international conventions that are pro-enforcement, that is, they provide only narrow grounds for refusing to enforce.
In this article, we will first talk about arbitration in Iran and after that, we will discuss enforcement of arbitral awards in Iran.

A legislation regarding international arbitration passed in Iran’s Parliament in 1977 under the title of “International Commercial Arbitration Act (ICAA)” which has been inspired by UNCITRAL Model Law.
According to article 1 of this act, ICAA will apply:

Recognition and Enforcement of Arbitral Awards in Iran:

Chapter 8 of International Commercial Arbitration Act, is about enforcement of the awards:
“Article 35: Enforcement.

A difficulty arises when an international arbitral award is neither enforceable under provisions of New York Convention nor ICAA. For example when an award is issued in a non-contracting states and it’s also not enforceable based on ICAA. In such cases, there are three theories that can be used by a competent court:

Defenses to Enforcement (ground for non-enforcement)

In brief, Article 5(2) defenses include:

These two additional defenses can be raised by the court itself.
Another restriction that exists in Iran legal system is article 139 of Constitutional Code of Iran.
According to “act of Islamic Republic of Iran’s Accession to the New York Convention on Recognition and Enforcement of Arbitral Awards “This convention will be applied without prejudice to article 139 of Constitutional Code of Iran.”
Article 139 states: “the settlement, of claims relating to public and state property or the referral thereof to arbitration is in every case dependent on the approval of the Council of Ministers, and the Assembly must be informed of these matters. In cases where one party to the dispute is a foreigner, as well as in important cases that are purely domestic, the approval of the Assembly must also be obtained. Law will specify the important cases intended here.”
This article states one of the controversial principles in the Constitution of Iran. Some scholars believe that this principle does not apply to States Companies so bringing a case before an arbitral tribunal by such companies is not in contract with that provision.

There are different kinds of international arbitral awards. Some of them are enforceable under New York Convention, and since Islamic Republic of Iran has ratified the Convention, they can be enforced in Iran provided that they have been granted in a contracting state and in relation to commercial disputes.
Some other awards are enforceable under “Iran’s International Commercial Arbitration Act”.
Other international arbitral awards that are not covered by NYC or ICAA can also be recognized and enforced by courts according to theories presented by well-known scholers.

ESK Law Firm is one of Iranian leading law firms, with a reputation for standing out – and for being outstanding. We provide legal services in areas such as international trade law; international investment law; banking and finance law; energy law; company law, litigation as well as conduct due diligence for entities, represent clients for negotiating, and designing and drafting various kinds of international contracts. Our clients include multinational corporations, businesses, entrepreneurs, financial institutions and governments who seek advice in respect to their domestic and international affairs, including cross-border transactions and inward and outward investment activities.
ESK Law Firm’s partners, with more than a decade experience in the legal services, provide professional services of substantial value to anyone who is presently managing, or considering development of local and international business operations. They offer the sharpest legal minds, the clearest advice, And an unshakable sense of what’s possible.