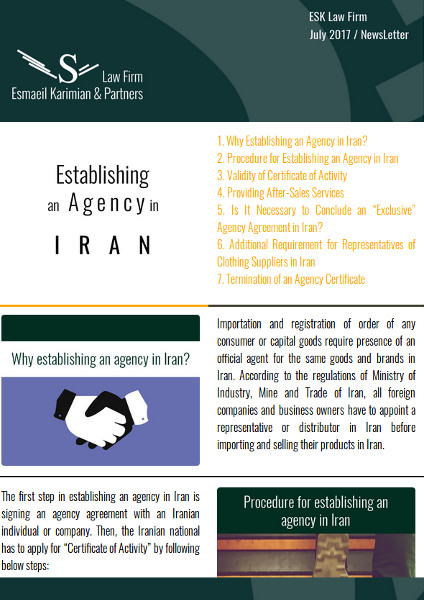 1. Why Establish an Agency in Iran?

The importation and registration of any consumer or capital goods ordered in Iran requires the presence of an official agent for the same goods and brands in Iran itself.
According to the regulations of the Ministry of Industry, Mine and Trade of Iran, all foreign companies and business owners have to appoint a representative or distributor in Iran before importing and selling their products in Iran.

2. Procedure for Establishing an Agency in Iran

The first step towards establishing an agency in Iran is the signing of an agency agreement with an Iranian individual or company. The Iranian national then has to apply for a “Certificate of Activity”. In order to do so, they must compile a number of documents:

(i) An application form and other relevant forms according to the format available on the website of the Iranian Center of Guilds and Traders (at www.gatc.ir)
(ii) The original agency agreement in English (official translation into Persian is required if the contract is not in English).
(iii) Original letter of commitment of the foreign company for guaranteeing after-sales services and providing spare parts (at least 10 years for vehicles, 3 years for electronic and telecommunication goods and 5 years for other capital and durable consumer goods from the date of the last supply to Iran).
(iv) Registration documents of the Iranian agency (if it is a company) and identity documents of the agent if he/she is an individual.
(v) Confirmation Letter of after-sales services network and capability of presenting services and providing spare parts.
(vi) Presenting tax file No. of the applicant in Taxation Affairs Organization.

The application forms and other above-mentioned documents should be submitted to the “Iranian Center of Guilds and Traders”. Documents are often reviewed in 10 working days and a “Certificate of Activity” will subsequently be issued to the applicant.

3. Validity of Certificate of Activity

The holders of a Certificate of Activity for vehicle and durable goods are obliged, in addition to observing the related articles in the Act of Protecting Consumer Rights, to take action to establish centers for after-sales services in proportion to the quantity and scope of distribution of their goods and inform the public of the list and particulars of such centers.

5. Is It Necessary to Conclude an “Exclusive” Agency Agreement in Iran?

There is no obligation for a foreign company to sign an “exclusive” agreement with its Iranian representative or distributor.

6. Additional Requirement for Representatives of Clothing Suppliers in Iran

The foreign company or its representative is obliged to produce clothes in Iran at least equal to 20% of the import value and at least 50% of it to be exported during the first two years and at least 5% should be added annually to the share of local production from the third year.

7. Termination of an Agency Certificate

In case of legal termination or nullification of an agency contract by any of the parties, the holder of the Certificate of Activity is obliged, while also informing the public, to report the matter to the Iranian Center of Guilds and Merchants in order to cancel the Certificate.