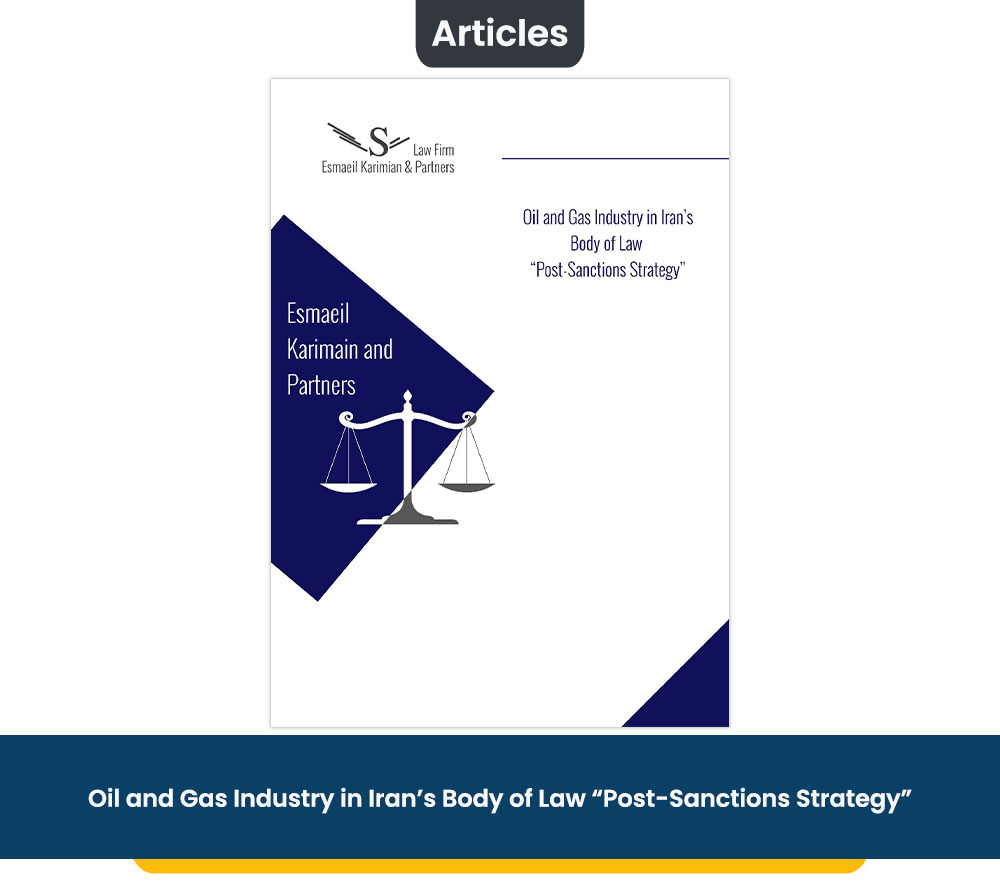 The Ministry of Petroleum of the Islamic Republic of Iran is responsible for all kinds of oil and gas activities. The Ministry by itself has got the four major subsidiaries body as follows which undertake implementation and operation of the above mentioned activities:

The Iran’s Unique Position in terms of hydrocarbon reserves is as follows:
I. Iran is endowed with 155 billion barrels of oil equivalent to 10.9 of the global oil reserves.
II. Iran owns 18 of the global natural gas reserves equal to 34 TCM of natural gas.
III. Iran’s current exploration projects will lead to a considerable increase in the country’s oil and gas reserves.
IV. Presently, 62 onshore oil fields, 16 offshore oil fields, 20 onshore gas fields, and 2 offshore gas fields are in operation in Iran.
V. 26 of hydrocarbon reserves and 50 of natural gas reserves are located across Iran’s common borders with its neighbors.

In order to attract foreign investment in Iran’s oil and gas industry, particularly after termination of sanctions, a committee known as the “Oil Contracts Review Committee” unveiled a new contract titled “Iran Petroleum Contract (IPC)” in late 2015. The primary purpose of this Contract is to make a dramatic change in the oil and gas industry of Iran. On the other hand, Iran’s Parliament has also played an important role in this evolution through legislation of several laws such as “Duties and Powers of the Ministry of Oil,” enacted in 2012, “Petroleum Law Reform Act” passed in 2011 and “The Fifth Development Plan” in 2010. However, The turning point of this legal evolution can be found in contractual mechanism of the implementation of projects in the upstream of oil and gas industry which is mentioned in law of “Duties and Powers of the Ministry of Oil” 2012.
In this article, the legal aspects of Iran’s petroleum rules and contracts, especially for post-sanctions era, have been analyzed.

1. Laws and Regulations Governing the Oil and Gas Industry of Iran

It seems that the latter paragraph, with the exception of the ownership of oil and
gas in the tanks and assign it to the government, implies a contraposition in which the main element of the production sharing contracts – partial ownership of foreign oil companies in production – is recognized. In other words, because in paragraph “D” of article “3”, only transfer of ownership of oil and gas in the tanks to contractors is prohibited, legal authorization is given to the Ministry of Oil to conclude contracts which lead to the co-ownership of foreign oil companies in production. However, in order to eliminate some misconceptions about the production sharing contracts, the share of foreign companies might be allocated with a particular mechanism such as delivery at the border or in a certain location so that the historical negative mindset that such sharing is against Iran’s Constitution can be set aside.
It seems that “Iran Petroleum Contract (IPC)” has be designed in accordance with paragraph “D” of article “3” of law of “Duties and Powers of the Ministry of Oil”, in which one of the duty of the Ministry is “Attracting and directing domestic and foreign capital to develop hydrocarbon fields, with priority of shared fields Through designing new contractual patterns such as cooperation with domestic and foreign investors and contractors without transferring the ownership of oil and gas stored in the tanks and in conformity with the protected production.”
Prior to the new legislations, “Buyback” was the only model for petroleum

contracts in Iran’s upstream oil and gas industry. By new legislations, however, the way of using partnership models has been paved and a new contract titled “Iran Petroleum Contract (IPC)” is drafted. Notwithstanding, there still is no restriction in using “Buyback” contracts. Therefore, both “Buyback” and “IPC” will be reviewed in this section.

Prior to the new legislations, “Buyback” was the only model for petroleum contracts in Iran’s upstream oil and gas industry. By new legislations, however, the way of using partnership models has been paved and a new contract titled “Iran Petroleum Contract (IPC)” is drafted. Notwithstanding, there still is no restriction in using “Buyback” contracts. Therefore, both “Buyback” and “IPC” will be reviewed in this section.

The second method of investment which is expressed in article 3 of FIPPA is “buy-back”. In recent years, buy-back contracts, as a contractual investment technique, have had a prominent role in Iran’s economy. This type of contract is mainly known for its use in the development of discovered oil and gas fields. In addition, buy-back contract is useable in other industries.
Buy-back contract is a kind of counter-trade arrangements which is also classified as a hybrid contract. It is often defined as a contract between a purchaser and vendor in which the vendor agrees to repurchase the property

from the purchaser if a certain event occurs within a specified period of time. The buy-back price is usually set out in the agreement. However, the buy-back transaction has acquired a broader meaning under Iranian law. As defined by Article 2 of the Executive Rules approved by the Council of Ministers, a buy- back transaction refers to a deal in which the supplier, wholly or partially, puts the needed goods and services for the establishment, expansion, reconstruction, improvement or continued production of manufacturing enterprises of the country at the disposal of the producer.

The price of the said goods and services, after deducting the amount of down payments plus the related costs dispersed on the basis of the concluded contract, is paid to the supplier or buyer through the delivery of goods or services of the producer and/or through delivery of other industrial and mineral goods and services produced in Iran. Due to some requirements in Iran’s Constitution and Petroleum Act, buy-back contracts are usually employed in the development of oil and gas fields in Iran.
Regarding oil and gas contracts, if the exploration is also under the offered scope of services, buy-back contract will be a categorized as “Risk Service Contract” with the special payment procedure. According to this type of contract, contractor concludes a contract with the investee government and utilize cash and non-cash items of provided capital in order to develop oil and gas fields. Further, various costs such as contractors’ remuneration are defined in such contracts and secured by selling the produced oil and gas and through “Long Term Crude Oil Sales Agreement” which is an annex to the buy-back contract.

These days, one of the most important debates in scientific and technical circles is optimizing contractual mechanism in the upstream oil and gas projects in Iran. In February 2014, a seminar was held in Tehran and some provisions of the new oil contracts which have been prepared by “Oil Contracts Revision Committee” unveiled under the title if “Iran Petroleum Contract (IPC)”. This contract has been prepared to rectify failures and gaps in different generations of buy-back contracts and is a beginning of an evolution in Iran’s petroleum contracts. On the other hand, Iran’s Parliament has played a significant role in this evolution by passing a few important laws, especially “the Duties and Powers of the Ministry of Petroleum Act” in 2012.

ranging from 15 to 20 years, the petroleum contract is terminated.
The seminar’s panels did not determine any specific forms of company for exploration and development operations, however, the production operation company will be formed as a “Non- profit Joint Operating Company”.

ESK Law Firm is one of Iranian leading law firms, with a reputation for standing out and for being outstanding. We provide legal services in areas such as international trade law; international investment law; banking and finance law; energy law; company law, litigation as well as conduct due diligence for entities, represent clients for negotiating, and designing and drafting various kinds of international contracts. Our clients include multinational corporations, businesses, entrepreneurs, financial institutions and governments who seek advice in respect to their domestic and international affairs, including cross-border transactions and inward and outward investment activities.

ESK Law Firm’s partners, with more than a decade experience in the legal services, provide professional services of substantial value to anyone who is presently managing, or considering development of local and international business operations. They offer the sharpest legal minds, the clearest advice, And an unshakable sense of what’s possible.