Publications Newsletters 2018 How to Choose a Company Name in Iran

How to Choose a Company Name in Iran 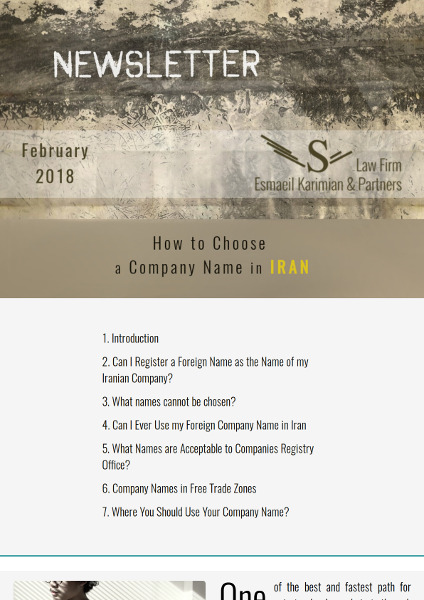 How to Choose a Company Name in Iran

One of the best and fastest paths for entering Iran’s markets is through registering a company. There are several types of companies in Iran, but the most popular ones are Limited Liability Company (LLC) and Private Joint Stock Company (PJSC). However, one of the challenges of registering a company in Iran is finding a suitable name. In some countries, foreign investors would be able to use their parent company name and if such name has not been registered before, it can be easily registered and used in these countries. However, it is almost impossible to use a foreign name in Iran since certain rules are in place.

2. Can I Register a Foreign Name as the Name of my Iranian Company?

According to the first article of above mentioned law, in order to protect Persian language, all the governmental organizations and also the companies are forbidden from using foreign names. There is also an instruction from the “Companies Registry Office” titled “Instructions for determining the names of legal entities” according to which choosing a foreign name is forbidden.

3. What Names Cannot be Chosen?

Based on the current procedure of “Companies Registry Office”, the following names cannot be registered for Iranian companies:

– It should be noted that a company’s right on its name will be ended after dissolution of the company.

4. Can I Ever Use my Foreign Company Name in Iran?

As explained, it is not possible to choose a foreign name for an Iranian company. However, foreign investors usually use their preferred names for their promotion activities and for presenting themselves in Iran. Since there is no rule to ban such usage of a foreign name, it is legal and almost common in Iranian markets. In other words, a foreign investor has to choose and register an Iranian name as official name of his company, but he can use his parent company name for presenting his business in Iran. For example if “Total Company” would like to register a subsidiary company in Iran, it has to find an Iranian name while it can use “Total-Iran” in promotions and presentations.

It should be noted that, in relationships with state organizations such as Tax Office and Social Security Organization, the official Iranian name of a company should be used.

5. What Names are Acceptable to Companies Registry Office?

Based on current procedure of Companies Registry Office, an Iranian name with at least three words should be chosen for a company in Iran. The third word of such name must be a Persian proper noun. E.g. Petro Gostar Saina (Saina developer of Petro – “Saina” is an old Persian name which means “phoenix”).

Finding suitable names is difficult for those who are not familiar with Persian language and legal issues of company registration. So it is recommended to seek legal assistance of Iranian lawyers for this procedure.

Although there are no different rules for choosing a company name in free trade zones, in practice some of the free zones accept to register foreign names for the companies that are registered inside these zones. Foreign names usually acceptable where the shareholders of an Iranian company are foreign nationals.

7. Where You Should Use Your Company Name?

Name of a company should be written on letterhead of the company and also on the company’s official stamp. It is also used for opening bank accounts and entering into contract and agreements with other individuals or legal entities.