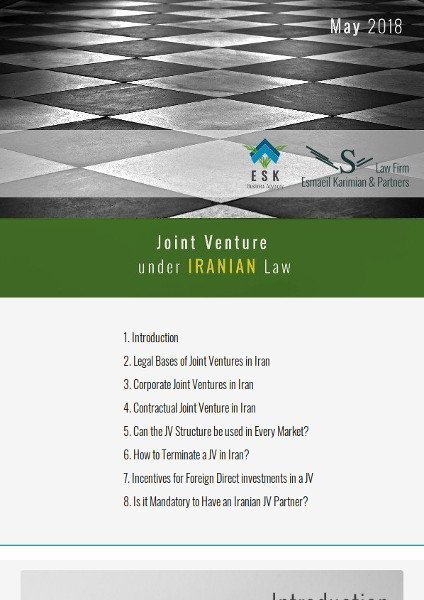 Iranian law allows both corporate JVs as well as unregistered contractual JVs in the form of a partnership. Joint ventures are subject to two sets of rules in Iran: I) contractual rules included in joint venture agreement, shareholders’ agreement, articles of association, transfer of technology agreement, intellectual property agreement, and so on; II) rules that are prescribed by the Acts, regulations and by-laws of Iran.

Contractual joint ventures are recognized and enforceable under the principle of freedom of contract as enshrined under Article 10 of the Iranian Civil Code (ICC). On the other hand, Corporate JVs are governed by commercial rules according to the Iranian Commercial Code and the Bill of Amending the Commercial Code 1969 (BACC).

The Iranian Commercial Code will govern the corporate JVs. The most common corporate structures used for the establishment of equity JVs in Iran are Limited Liability Company (LLC) and Joint Stock Company (JSC) as both provide limited liability to their members and organised rules governing these two structures. JSCs are divided into private joint stock companies (PJSC) and public joint stock companies, with the latter being used for listing purposes only. As such, a PJSC is nearly always the preferred choice as between the two.

As implied, a Contractual Joint Venture is for use by two parties wishing to carry out a joint enterprise, where the parties do not want to go to the expense and formality of setting up a joint venture company. Since principle of “freedom of contract” is recognized in Iranian law according to which people are able to fashion their relations by private agreements, a contractual JV can be form by mutual agreement of the parties. It should be noted that, although parties are free to draft their desired terms and conditions in a contractual JV, they cannot breach mandatory rules of law such as those related to public order. Therefore, it is recommended to seek legal advice in drafting a JV contract.

5. Can the JV Structure be used in Every Market?

As a general rule, the JV structure can be used in every industry sector, except for those areas that are either under complete monopoly of the government (such as main telecommunications networks, upstream oil production) or in limited instances where foreign majority shareholdings are not permitted (such as certain activities in the transport sector where foreign shareholding is limited to 49%).

In a corporate JV, the mere termination of JV agreement would not cease parties’ relationship because it is necessary to dissolve the JV Company which established according to Iranian law. Termination of a contractual JV, however, is not subject to any public sector body’s approval and mutual agreement of the parties or using terminate right by one of the parties would be sufficient to break apart a contractual JV agreement.

7. Incentives for Foreign Direct investments in a JV:

Article 3 of the Foreign Investment Promotion and Protection Act (FIPPA) states the civil partnership as a method of investing, which can be established in the form of a joint venture. The major benefits provided by FIPPA are guarantees of foreign currency availability and transferability. FIPPA also guarantees foreign capital against nationalization and expropriation, and in such cases the Foreign Investor shall be entitled to receive compensation. Possibility of the referral of investment-related disputes to international authorities is another advantage of FIPPA.

8. Is it Mandatory to Have an Iranian JV Partner?

Generally speaking, there is no legal obligation to have an Iranian partner for doing business in Iran. However, having Iranian partner or shareholder is required in very limited circumstances such as in Internet Service Provider (ISP) Companies. On the other hand, an Iranian business partner can pave your way into the Iranian market by providing required business and cultural information and establish useful connections.