Non-pecuniary Damages Caused by Breach of Contracts under Iranian Law 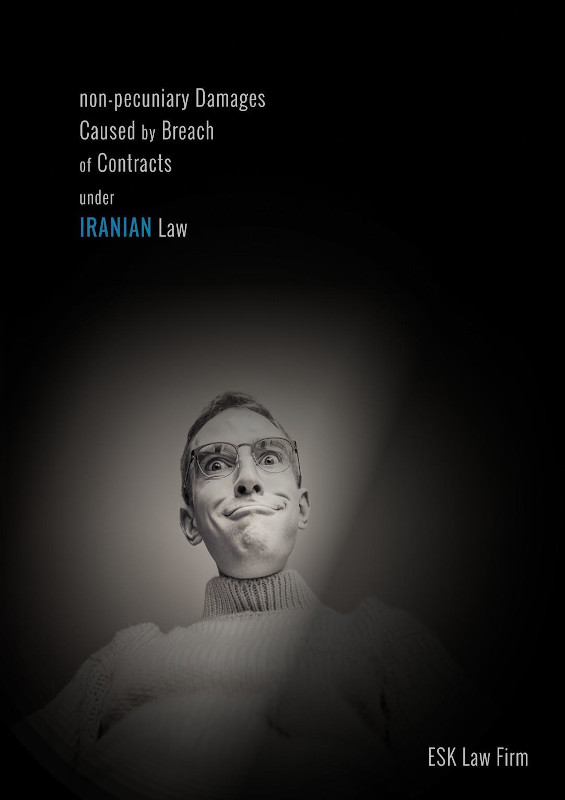 Non-pecuniary Damages Caused by Breach
of Contracts under Iranian Law

One of the major purposes of law in ancient societies was regulating people’s behavior and protecting their assets against pecuniary damages. Since then, several centuries of discussions had been made regarding the theory of restitution and consequences of civil liability, but it is believed that the distinction between pecuniary and non-pecuniary losses was not clearly drawn before the nineteenth century. On the other hand, It seems Islamic rules drawn more attention to non-pecuniary damages that may be incurred by an individual or a group of people from the very beginning of Islam. Prohibition of defamation, slander and annoy of people can be traced in The Quran (609–632 CE), the religious text of Muslims.

Iranian law which has been under influence of Islamic rules, however, does not have a specific set of rules about non-pecuniary damages while such damages can be traced in scattered regulations.

2. What is Non-pecuniary Damage?

Typical examples for non-pecuniary loss include: pain and suffering and loss of amenity in a case of personal injury; loss of reputation in a case of libel; social discredit in a case of malicious prosecution; mental distress; or physical inconvenience and discomfort. On the other hand, non-pecuniary losses in commercial contracts mainly include loss of profit, loss of chance and opportunity and damage to the reputation of one of the contracting parties.

Demanding non-pecuniary damages face two basic challenges in Iran: A- Proof of non-pecuniary damages, B- determination of the amount of damage. However, Civil Law commentators believe that the mentioned challenges shall not deprive affected party of claiming damage. Therefore; it could be accepted the harmed party is obligated to prove the damages incurred to him; and, determining the amount of damage incurred is the responsibility of the judge or the arbitrator. But it is difficult to convince the Iranian court to accept such damages in commercial contracts.

Non-economic damages implied in a few Iranian laws under different names. The main ones are as follows:

¢ Article 171 of Iran’s Constitution states: “Whenever an individual suffers moral or material loss as the result of a default or error of the judge… the defaulting judge must stand surety for the reparation of that loss…”

¢ Article 1 of Civil Liability Act of Iran states: “If anyone without legal authorization, deliberately, or as a result of negligence inflicts damage to someone’s life or health or property or liberty or dignity or business reputation or any other right provided by law; and resulted in pecuniary or non-pecuniary loss, he has to compensate the damages”.

¢ Article 2 of the Civil Liability Act of Iran states: “In the event that an action of a person has caused material or immaterial damage, the court shall order for compensation….”

One of the most famous juridical rules of Islam that has been considered a significant resource in many jurisprudential issues is the “no harm” rule. According to this rule, it is prohibited and illegal for anyone to harm another. The term “zarar” (harm or loss) refers to any defect that is inflicted on the property, body, honor and rights of individuals, so it has a wide scope and certainly includes non-pecuniary damages. Since it is allowed in Iranian law to use Islamic rules when there is no clear regulation about a specific incident, many judges, lawyers and law commentators refer to “No harm rule” to demonstrate that non-pecuniary damages have to be compensated.

6. Viewpoint of the Iranian Court about Non-Pecuniary Damages

After the victory of the Islamic Revolution in Iran, Iranian courts have ruled in many cases to pay compensation for non-pecuniary damages. Below are few examples:

¢ Tehran Criminal court No, 181 ordered for payment of compensation by a husband accused his wife of adultery because of inflicting of moral damage to the wife. Similar judgment issued by Civil Court of Kurdistan Province.

¢ The appeal court of Tehran convicted the defendant of a case to pay damage to the plaintiff for moral damage that he caused by publishing an offensive article in a newspaper.

¢ A court of first instance ordered for compensation where a girl lost her beauty due to failure in her nose surgery.

It can be realized from the above examples that the main focus of the Iranian courts in compensation of non-pecuniary damages is where damages related to moral accusations, personal injury and loss of reputation.

In commercial cases, when the particular contract is for profit, the emotional aspect is less important and therefore claiming damage is almost impossible. When profit is the motive, aggravation and stress are part of the cost necessary to attain business success. However, this does not preclude emotional distress damages in all commercial situations.  A particular contract between businesspeople may not have a profit motive and may involve an emotional interest.

Considering the above examples of courts’ judgments, it seems claiming emotional damages in a contract is difficult in Iran. On the other hand, law commentators believe that the loss of future profits is claimable when such profit is predictable and expectable for contracting parties.