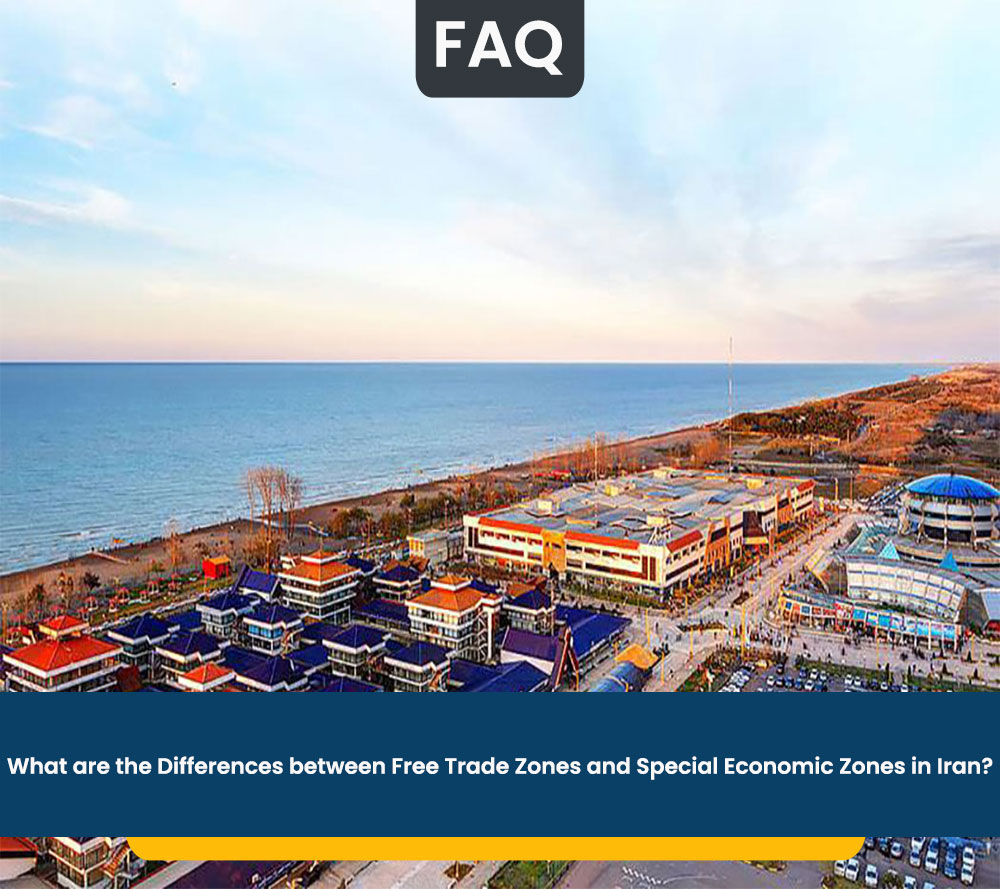 The philosophy for the establishment of Free Trade Zones (FTZ) and Special Economic Zones (SEZ) is, as it has been mentioned in respective laws, to provide prosperity, economic development and growth, promotion of investment, active presence in local and international markets, production of industrial goods and services, increase in national income and increase in employment.

Such zones have facilitated trade and industrial activities and they have promoted investment benefiting from great reduction in formalities such as: customs, banking and financial systems, insurance and labour laws, foreigner entrance etc.

According to the “Law on the Administration of Free Trade-Industrial Zones [LAFTIZ]” dated August 28, 1993, Kish Island, Qeshm Island, Aras, Anzali, Makou, Arvand and the Port of Chabahar were declared as the Free Zones of Iran.

The council of ministers later adapted the bylaws of the free zones. These bylaws have defined and set out all regulations pertaining to import, export, investment, insurance, banking, labour and employment in these zones.

What are the Differences between FTZ and SEZ?

1. While there is a 20-year tax exemption in FTZ, tax regulations in SEZ are like the rest of the country.

2. Retail sale in SEZ are allowed just for foreigners, but in FTZ both Iranians and foreigners can do so.

3. Visa regulations in SEZ are just like the general rules of the country, but in FTZ visa is given in the borders.

4. Labor regulations for hiring foreign workers in FTZs are special for those regions while in SEZs it is according to the country’s law.

5. Currently there are only 7 Free Trade Zones in Iran while there are more than 26 SEZs in Iran.

6. As a general rule and as the names suggest, investment facilities in FTZs are more expanded than SEZs.

What are the Incentives and Advantages for Investment in Free Trade Industrial Zones?

♦ Foreign investment in any amount

♦ Freedom of entry and exit of capital and profits

♦ Protection and guarantees for foreign investments

♦ Transfer of partly manufactured goods to the mainland without paying customs duties.

♦ Elimination of customs duties on imports from outside to the region

♦ Utilization of raw materials, oil and gas as feedstock and fuel for all industrial activities.

What are the Incentives and Advantages for Investment in Special Economic Zones?

♦ Import of goods from abroad or other free trade zones or industrial areas will be car- ried out with minimal customs formalities and internal transit of imported goods will be performed in accordance with the relevant regulations.

♦ Log entry of merchandise subject to the laws and regulations of special zones will be done without any customs formalities.

♦ Goods imported from outside or industrial areas or other commercial zones can be exported without any formalities.

♦ Management of the region is allowed to assign parts of the region to qualified natural or legal persons after classification and valuation.

♦ Owners of goods imported to the region can send all or part of their goods for tempo- rary entry into the country after following customs clearance regulations.

♦ Importers of goods are permitted to hand over, to others, part or all of their products against warehouse receipt, which will be issued by the district administration. In this case the breakdown warehouse receipt holder would be the owner of the goods.

♦ The management of each district is authorized to issue certificates of origin for goods per applicant with the approval of the customs authorities.

♦ All the goods imported to the region required for production or services are exempted from the general import-export laws. Exports of goods to other parts of the country will be subject to export and import regulations.

♦ Based on paragraph (d) of clause (25) of the Law of the Second Economic, Social and Cultural Development Plan of the Islamic Republic of Iran, the ratio of goods produced in the zone and imported to the country (the proportion of total value added and domestic parts and materials used in the total price of the commodity production) is allowed without any limitation. In addition, it is not required to order and open letter of credit.

♦ Goods manufactured in special economic zones, as well as raw materials and CKD parts, which are imported into the country, are not subject to price regulation due to un-utilized resources and/or allocated currency.

Should I go to a Free Trade Zone or Special Economic Zone?

Before establishing your business in a FTZ or SEZ, you should know that most of advantages mentioned for these Zones are for manufacturing and exporting; therefore, it is not recommended for service companies to use these zones.