Social Security Insurance in Iran Establishing an Agency in Iran 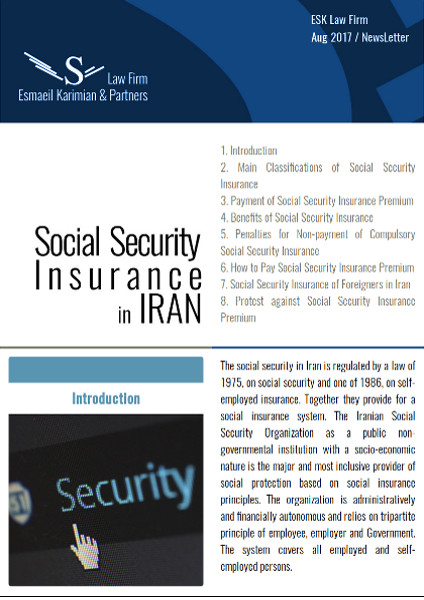 Social Security Insurance in Iran
Establishing an Agency in Iran

The Iranian Social Security Organization, a public non-governmental institution with a socio-economic nature, is the major and most inclusive provider of social protection based on social insurance principles.

The organization is administratively and financially autonomous and relies on a tripartite structure of employees, employers and the Government.

The system covers all employed and self-employed persons.

(i) Compulsory Insurance: A person who works at a workplace under the direction of an employer or his agent and receives a wage or salary must be insured by his employer. The social security charge is levied on income up to a certain ceiling which is revised annually.

(ii) Voluntary Insurance: According to social security Law, individuals who are not covered by compulsory insurance can be insured voluntarily through a contract in accordance with the relevant regulations approved by the High Council of Social Security. Such individuals must not be over the age of 55 and must have recorded at least 30 days of contribution payment.

(ii) 3% will be paid by the Government

(iii) 7% will be paid by the employee

(iv) 3% of unemployment insurance will also be paid by the employer for Iranian employees only.

“Employers who refuse to insure their workers, in addition to paying all workers’ rights, will be fined up to two to ten times the relevant premium, considering conditions of the offender and the amount of the offence”.

In addition to this, the employee is able to sue his employer for non-payment of his social security insurance premium.

Article 30 of Social Security Law of Iran states that:

The premium recipient is the nearest branch or agency of the social security organization.

According to a law ratified on September 26, 1979 by the Islamic Consultative Assembly, foreigners are also required to pay the social security premium to the SSO and shall be covered by SSO regulations except in the following cases:

Article 42 of Social Security Law of Iran states that:

“If the employer should object to the amount fixed by the organization for the insurance contribution and penalties for delayed payments, he may, within 30 days of the date of notification, submit his protest to the organization in writing. The organization is required within thirty days of the date of receipt thereof to present same to a Board of First Instance for Assessing Claims. Where no protest is received from the employer during the period specified, the assessment of the organization shall be final and the amount of insurance contribution and the penalties as determined will be collected in accordance with the Article 50 of this law”.