Some Legal Requirements for Investing in Industries of Iran (3) 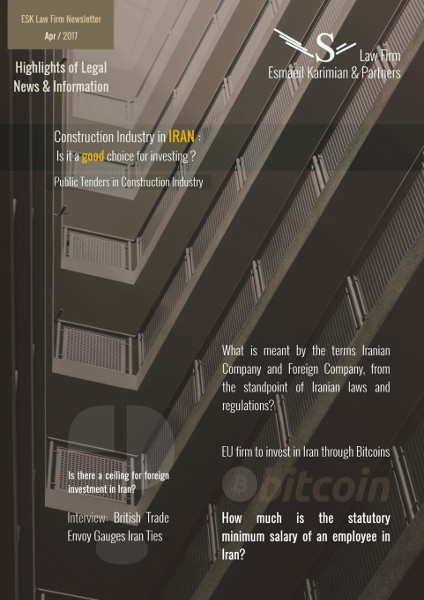 Some Legal Requirements for Investing in industries of Iran (3)

1. Construction Industry in Iran: Is it a good choice for investing?

With property values exceeding those of similar-sized countries, Iran has seen a recent boom in the real estate market since 2016.
Encouraged by the country’s youthful demographic trends, investors are increasingly putting their faith in real estate, which has stood the test of time as a safe, fixed asset.
At the same time, contractors and consultants have spotted opportunities throughout the country to cater for both tourists and local residents seeking modern and convenient new homes. Investors are eager to invest in these projects which will satisfy growing demand and guarantee returns for years to come.
Growth is also occurring in the country’s infrastructures. Iran’s government and public sectors are attempting to build and renovate infrastructure all over the country which provides a great opportunity for investors to invest in these projects by setting up public-private partnerships (BOT, BOOT, Joint venture, etc.). Such projects offer favourable interest rates for investors’ capital.
In recent years, the construction industry has been thriving due to an increase in national and international investment to the extent that it is now the largest in the Middle East region.
Although there are several similarities between construction law in Iran and other countries, it has its own rules and regulations which are different from those in the West. As such, foreign contractors who enter the market for the first time must be prepared to face a different environment.

Based on “Tender Law” of Iran:
“All three branches of Government in Iran shall follow the stipulations of this Law in organizing a bidding; this includes: ministries; public organizations, institutions, and companies; profitable institutes affiliated to the Government; public financial establishments and banks; public insurance companies; nongovernmental public institutions and foundations…”.
Therefore, when an organisation within the state sector intends to deliver a construction project to a contractor, it is required by law to use the tendering procedure. If it fails to comply with this requirement, the contract in question is void.

3. Is there a ceiling for foreign investment in Iran?

Financial Tribune met with the UK’s trade envoy to Iran to catch up on the latest developments in Tehran-London economic relations. Lord Lamont, who also chairs the British-Iranian Chamber of Commerce, was appointed the UK’s trade envoy to Iran as part of a wider government attempt to reverse Britain’s underwhelming record of exports only three days after international sanctions against Iran were lifted in January 2016. Excerpts of the interview follow:
Q: What are other impediments to resuming Iran-UK trade ties? Is the British government taking any steps to address them? If so, what are the signs?
– Yes, obviously. You will see here leading British companies, like Glaxo, Jaguar Land Rover. British trade is increasing, has increased with Iran, it is up I think 47%. British trade with Iran was considerably less and shrunk more during the period of sanctions than that of a country like Germany.
So, it is to a much lower base, but it has been increasing. When you say what other obstacles are there: there are issues related to visas, you can hardly have trade without having visas, you need visas in both directions. The ambassador is currently discussing this with the Iranian authorities, because we would like to increase the number of visas.
There is plenty of scope for Britain to increase its trade with emerging markets and Iran is perhaps the most exciting emerging market there is in the world today.
(Source: Financial Tribune Newspaper, 13/April/2017)

5. What is meant by the terms “Iranian Company” and “Foreign Company” from the standpoint of Iranian laws and regulations?

6. How much is the statutory minimum salary of an employee in Iran?