Some Legal Requirements for Investing in Industries of Iran (2) 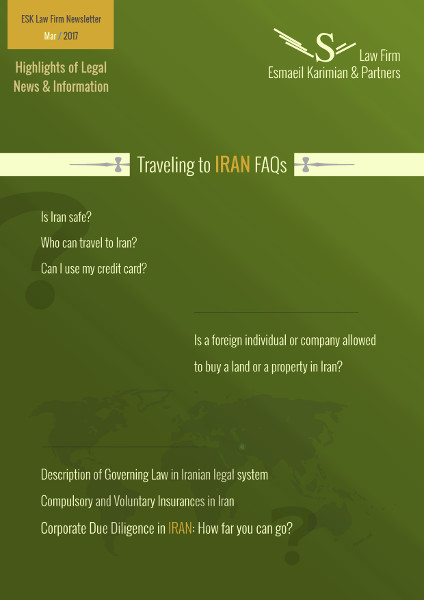 Some Legal Requirements for Investing in industries of Iran (2)

The short answer is “Yes”. The long answer is “Yes, of course.”
Iran boasts an excellent security record, especially when you take into account the fact that it is located in one of the world’s most volatile and unstable regions. The country is a safe haven in a sea of turmoil and you would be hard-pressed to find a foreign tourist who felt unsafe during their visit.
Popular destinations such as Tehran and Isfahan have formed tourism law-enforcement units whose main purpose is to serve foreign travellers.
Furthermore, the legal arm of Iran’s Cultural Heritage, Handicrafts, and the Tourism Organization even help foreign visitors pursue complaints after they have left the country should they want the organization to follow up on their complaint.

B. Who can travel to Iran?

Citizens of every country recognized by the Iranian government can travel to Iran. The country offers a 30-day visa-on-arrival to citizens of 190 countries at its international airports.
Iran has also waived visa requirements for citizens of Turkey, Georgia, Azerbaijan, Armenia, Syria, Egypt, Lebanon and Bolivia. Russians traveling to Iran as part of an organized tour are not required to attain a visa.

C. Can I use my credit card?

Due to banking sanctions, international credit cards do not work in Iran. To circumvent the problem, authorities have introduced the so-called Tourist Card, a prepaid credit card with a maximum balance of $5,000. The card can be acquired at international airports and recharged at any of the branches of Bank Melli, Bank Sepah and Tourism Bank across the country.
(Source: Financial Tribune, March 04, 2017)

2. Is a Foreign Individual or Company Allowed to Buy Land or a Property in Iran?

One of the main limitations experienced by foreign investors in Iran is ownership of immovable property such as land.
Article 2 of “Iran’s Foreign Investment Promotion and Protection Act (FIPPA)” states in its Note that:
“The law for the ownership of immovable property by foreign nationals enacted on June 6, 1921 shall remain in effect. Ownership of land of any type and to any extent in the name of foreign investors is not permitted within the framework of this Act”
As expressed in the above article, there is an old Act in Iran entitled “The Law for the Ownership of Immovable Property by Foreign Nationals” (1921) which puts limitations on foreign nationals owning certain types of land. However, this Act only prohibits foreign nationals from owning “Agricultural Land”.
However, there is also the “Regulation of Acquisition of Properties by Foreign Nationals” (1939) which sets out complicated conditions and procedures relating to ownership of land by foreign nationals.

In accordance with the Regulation, importance is attached to the location of the land and the purpose behind its purchase. Furthermore, the purchasing request must be accepted by the “State Organization for Registration of Deeds and Properties”, “Ministry of Foreign Affairs” and most of the time by the “Board of Ministries”!
As such, the question arises as to whether it is possible to acquire land as a foreigner without such difficulties. The answer is yes.

The solution that we usually recommend is to register a company in Iran which is fully owned by the foreign national. As this company is registered in Iran, its nationality is Iranian (regardless of who owns its shares) and thus it would be able to buy land or a property in Iran.

3. Description of Governing Law of Contracts in Iranian Legal System

Article 968 of the Iran Civil Code reads as follows:
“Obligations arising out of contracts are subject to lex loci contractus except where both of the parties are foreign citizens who have explicitly or implicitly subjected the contract to another law.”
(lex loci contractus is the Latin term for “law of the place where the contract is made”)
The prima facie consequences of the above article are:

(i) Only the laws of the place of concluding a contract shall apply to it if at least one of the parties to the contract is Iranian.

(ii) Where both of the parties are foreign citizens, they are free to subject their contract to a law other than lex loci contractus.

(iii) The intention of the foreign citizens to avoid application of lex loci contractus must be declared by the parties explicitly or implicitly.

These consequences are based on an interpretation of article 968 that considers it to be a mandatory provision of the Iran Civil Code. Under a more liberal interpretation, article 968 is a facultative provision allowing the parties to adopt any law as the governing law of their contract.

4. Compulsory and Voluntary Insurance in Iran

There is only one compulsory insurance policy in Iran which is “civil liability insurance for motor vehicles”. Based on Iran’s law, all individuals owning a ground motor vehicle are obliged to insure their liability against a third party.
This insurance will compensate for two types of damage:

These damages include all financial damages imposed on a driver involved in a driving accident to a third party such as damages resulting from the accident; any subsequent fall, fire or blast of the vehicle; and harm caused by the load of the vehicle to the third party.

These tolls include damages arising from death and compensation for death, maim, temporary or permanent disabilities and any subsequent medical expenses resulting from the relevant accident.
Other insurance policies in Iran are optional unless a contract between two parties makes a kind of insurance mandatory for one or both of the parties.

5. Corporate Due Diligence in Iran: How Far You Can Go?

International companies and investors usually ask about the possibility of conducting due diligence on companies in Iran. They are interested to know which information is publicly available and which is only accessible through a company’s documents and therefore requires the cooperation of a company’s directors.
The only available database in Iran which provides information about registered companies is the database of the “Companies Registration Office” which provides a company’s registration number, its registration address, the type of company it is and any recent changes that have taken place within the company.
In order to access other information about a particular company in Iran, including properties, debts, litigation and arbitration cases, the permission of the company’s directors is required.