Some Legal Requirements for Investing in industries of Iran (1) 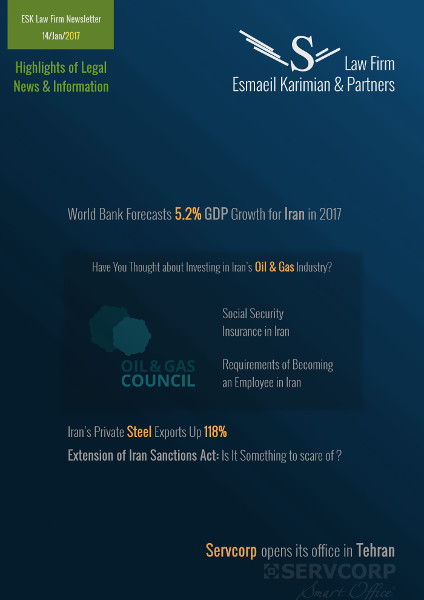 Some Legal Requirements for Investing in industries of Iran (1)

In its recent report titled “Global Economic Prospects”, the World Bank forecast a growth of 5.2 percent in gross domestic product (GDP) for Iran in 2017. This should be seen in conjunction with the fact that GDP growth in Iran is estimated to have strengthened considerably last year, bolstered by growth in oil production as well as gains in the automotive, trade and transport sectors.
The recent Iranian nuclear deal has paved the way for increased investment in Iran and has encouraged a large number of corporations to enter into the Iranian markets.
Iran has unlimited investment and business opportunities to the extent that it can be called an “Investors’ Paradise”. In turn, we are seeing emergence of one of the most powerful economies in the world.

2. Have You Thought about Investing in Iran’s Oil & Gas Industry?

Iran, with 33/6 trillion cubic meters of natural gas reserves (which is equivalent to 234 billion barrels of crude oil reserves), is currently the world’s largest owner of gas reserves.
Furthermore, the volume of normal and recoverable crude oil reserves within the country amounts to about 157 billion barrels. Overall, the total volume of oil and natural gas reserves amounts to 400 billion barrels.
In order to attract foreign investment in Iran’s oil and gas industry, particularly after termination of sanctions, a committee known as the “Oil Contracts Review Committee” unveiled the “Iran Petroleum Contract (IPC)” in late 2015. The primary purpose of this Contract is to dramatically change to the oil and gas industry of Iran.
The Iranian Parliament has also played an important role in this evolution through the introduction of several laws such as “Duties and Powers of the Ministry of Oil,” enacted in 2012, the “Petroleum Law Reform Act” passed in 2011 and “The Fifth Development Plan” in 2010.
However, the turning point in this legal evolution can be found in the contractual mechanism for the implementation of projects in the upstream of oil and gas industry which is mentioned in “Duties and Powers of the Ministry of Oil” (2012).

4. Requirements of Becoming an Employee in Iran

Any individual who works for someone else (an employer) for a specific salary will be considered to be an employee. An “employer” is an individual, or a legal entity, whom the employee works for, at his request, for a specific salary.
According to Labor Law, all employees must be at least 15 years old. However, there are specific obligations owed to employees under the age of 18. As such, employers are recommended to employ individuals who are at least 18 years old.
Employers must also:

Iranian private steelmakers exported 2.56 million tons of crude steel in the period of nine months prior to December 20 (2016), recording a 118% upsurge compared with the corresponding period of the previous year.
Considering Iran’s rich energy resources, raw materials, human resources and available technological capabilities, the country has an appropriate background to facilitate investment in its steel industry.
The National Iranian Steel Industry Company (NISCO)’s current installed capacity is 8 million tons per annum and necessary measures have been taken to increase the capacity to 10 million tons a year.
Iran is the biggest steel producer in the Middle East and North Africa. The country’s main steel production facilities are located in Isfahan and Khuzestan provinces.

6. Extension of Iran Sanctions Act: is it Something to be Scared of?

The U.S. Senate passed a 10-year extension to sanctions against Iran last year which resulted in increased political tension between the two countries.
Iran maintains that the measure amounts to a clear violation of the Joint Comprehensive Plan of Action (JCPOA), a nuclear agreement between Tehran and the Group 5+1 (Russia, China, the US, Britain, France and Germany).
Business experts, however, believe that extension of the ISA will not considerably affect Iran’s deals with other countries; many foreign companies have already set-up business in Iran or have at least begun planning entry into Iran’s markets.