Analyzing the Possibility and Procedure of Enforcing Foreign Judgments in Iran 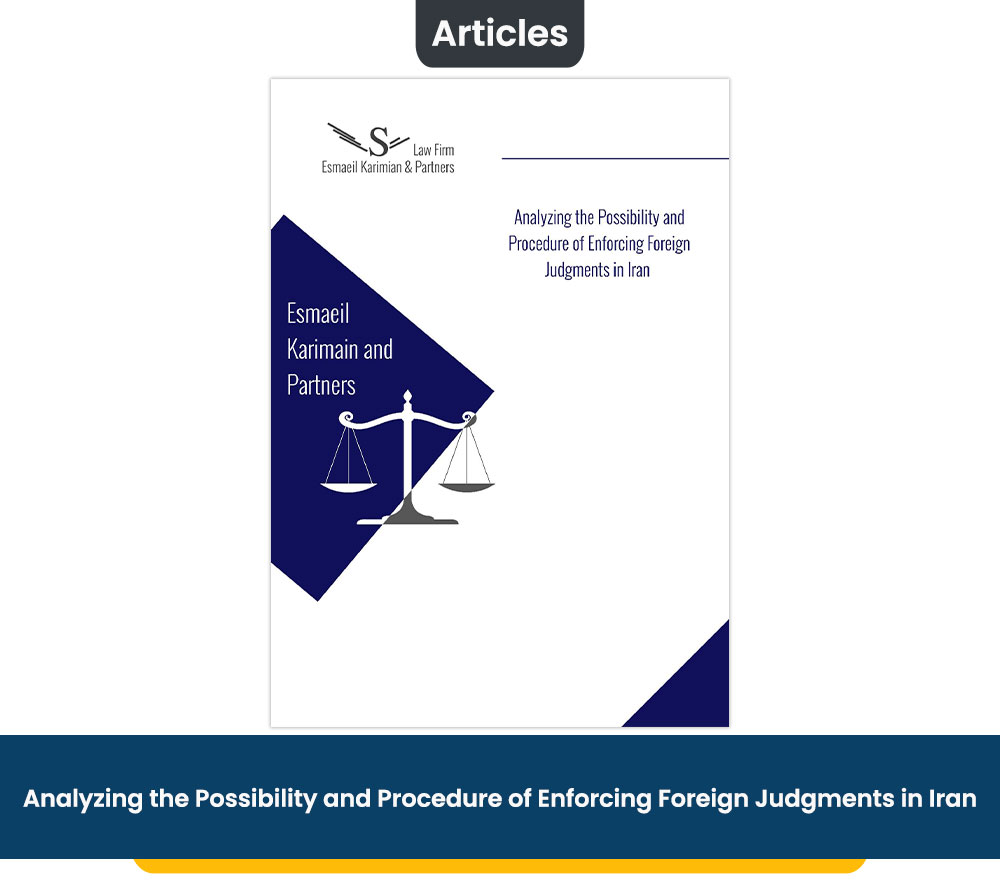 Analyzing the Possibility and Procedure of Enforcing Foreign Judgments in Iran

1. Introduction of related rules and regulations.

In Iran’s legal system, there are two separate Acts which mention the possibility of enforcement of a foreign judgment in Iran. First one is “Civil Code of the Islamic Republic of Iran” which is passed in 1928, and the second one is “ Civil Judgments Enforcement Act” passed in 1977, which numerates the conditions of enforcing foreign judgments in Iran. What comes below is the text and context of related rules in these two Acts.

2. Original Texts and Analysis of the Acts

The original texts of some rules in Iran’s “Civil Code” and “Civil Judgments Enforcement Act” have been mentioned below. They have been obtained directly from Iran’s official Gazette which is the main and the most reliable source for Iran’s laws and regulations. We have divided the rules into two sections and also presented our legal analysis for each of these rules so that they become understandable.

Substantive rules include those rules which are about the nature of rights and duties and define their scope. A right, such as right of enforcing foreign judgments, cannot be recognized unless it is expressed by a substantive rule.

2.1.1 Civil Code of the Islamic Republic of Iran

Article 972 of Iran’s Civil Code states: “Effect cannot be given in Iran to judgments issued by foreign courts and official documents recognized as being enforceable by law in a foreign country unless an order to do so is issued in accordance with Iranian laws”
According to this article which is the oldest rule and an starting point for recognition of foreign judgments in Iran, when a judgment is issued by a foreign court, it has to be recognized in an Iranian court so that it can become enforceable. However, an Iranian court will not order the enforcement of such judgment unless it meets certain conditions which are mentioned in other rules. At the same time, it should be brought before a competent court of Iran, otherwise it would be rejected.

Article 974 of Iran’s Civil Code states: “The stipulations of Article 7 and Articles
962 to 974 of this Act will only be enforced insofar as the enforcement is not incompatible with the international treaties signed by the Government or with the provisions of special laws”.
Based on this article, when a foreign judgment has been asked for recognition and enforcement, it has not to be contrary to Iran’s treaties with other countries. Moreover, if there is law in Iran which says a particular judgment cannot be enforced in Iran, that law will prevail and the judgment will be set aside.

Article 169 of “Civil Judgments Enforcement Act” of Iran states: “Civil Judgments issued by foreign courts are enforceable in Iran if they satisfy the following conditions, unless a different procedure is mentioned by the law:

As it is explicit from this article, a foreign judgment must have certain conditions to become enforceable in Iran. In addition, there is a condition which is not stated in this article, but it is considered as important by Iranian courts. This condition is: “The judgment should be in civil matters” Because this condition and article 169 express the most important rules regarding the recognition and enforcement of foreign judgments in Iran, we will analysis these conditions one by one:

The judgment should be in civil matters
Example of civil matters are: debts resulted from business transactions, real estates, contracts, tort, marriage and divorce, etc. on the other hand, judgment concerning criminal matters cannot be enforced based on this Act.

1. The judgment from the Iranian Courts should be recognized and enforced in the foreign country by the treaties or reciprocal deal.

recognition and enforcement can be done only if there is treaty between Iran and the foreign country or based on reciprocity. Iran is not a signatory of any international treaty or convention relating to recognition of foreign judgments, and Iran’s bilateral treaty for such purpose is also limited to a few countries. Therefore, most of foreign judgments have to use the second method which is reciprocal deal. Reciprocity takes place when courts of a foreign country recognize and enforce judgments issued form an Iranian court.

2. The judgment should not be contrary to the public order or moral of Iran.

Public order mostly means safety, secure economy and social harmony. Therefore, if a judgment disturbs these elements of public order, or when it is known to be immoral in Iran, it cannot be enforced.

3. The judgment should not be contrary to the international conventions and special laws of Iran.

This condition repeats the article 974 of Iran’s Civil Act which is explained
above.

4. The judgment should be final, definite and enforceable in the country of origin.

In many countries, when a judgment is issued by a “court of first instance”, it is possible for the losing party to challenge it by seeking to vacate the judgment. On the other hand, a judgment might not be enforceable due to some obstacles such as lapse of time. Therefore, when a judgment is not final and definite because it is challenged by the losing party in an appeal court, or when it is not enforceable in that foreign country, it cannot be recognized and enforced in Iran.

5. A contrary judgment should not have been issued from the Iranian court.

Sometime a person brings its case before two courts in two countries. In such a situation, that person cannot enforce the foreign court judgment when a contrary judgment is issued in Iran regarding that case.

6. The subject matter of the judgment should not be exclusively within the jurisdiction of the Iranian Courts.

Certain matters can only be dealt with in Iranian courts. These include but not
limited to: public and governmental properties, several kinds of crimes and political matters. As a result, if a person seeks to enforce a judgment in Iran which is about these matters, his request will be rejected.

7. The judgment should not be connected to immovable property located in Iran.

Disputes related to real estate properties which are located in any place in Iran cannot be judged in a foreign country, and consequently, if a judgment is issued which is connected to such immovable properties, it cannot be enforced in Iran.

8. The enforcement order should have been issued by a competent authority in the country of origin.

Procedural rules include those rules which determine a mechanism for execution of substantive rules. For example they show a procedure by which a person can seek the enforcement of a foreign judgment.

2.2.1 Civil Code of the Islamic Republic of Iran

There is no procedural rule in Civil Code of Iran regarding the enforcement of foreign judgments. This is because Civil Code is about substantive matters.

This Act has a few rules regarding the method, required documents and the competent court for seeking the enforcement of a foreign judgment.

Article 172 of “Civil Judgments Enforcement Act” states: “Enforcement of the judgment should be requested by a written application, and the name of plaintiff and defendant and their information should be written in the application”

Article 173 of “Civil Judgments Enforcement Act” states: “Below documents should attach to the enforcement application:

ESK Law Firm is one of Iranian leading law firms, with a reputation for standing out and for being outstanding. We provide legal services in areas such as international trade law; international investment law; banking and finance law; energy law; company law, litigation as well as conduct due diligence for entities, represent clients for negotiating, and designing and drafting various kinds of international contracts. Our clients include multinational corporations, businesses, entrepreneurs, financial institutions and governments who seek advice in respect to their domestic and international affairs, including cross-border transactions and inward and outward investment activities.

ESK Law Firm’s partners, with more than a decade experience in the legal services, provide professional services of substantial value to anyone who is presently managing, or considering development of local and international business operations. They offer the sharpest legal minds, the clearest advice, And an unshakable sense of what’s possible.