What you need to know before signing a contract in Iran 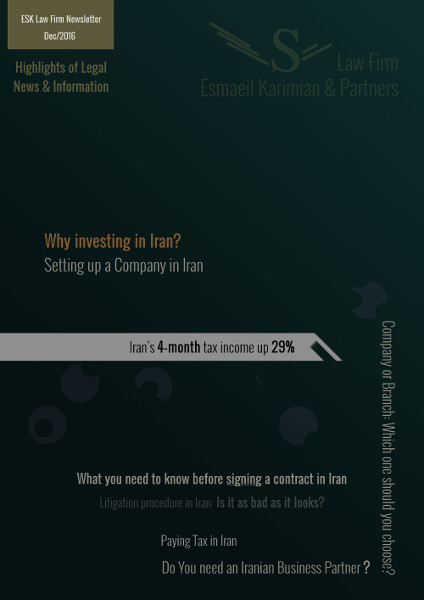 What you need to know before investing in Iran

What you need to know before signing a contract in Iran

Iran has long been of geostrategic importance because of its central location in Eurasia and Western Asia and its proximity to the Strait of Hormuz.

The country is regarded as one of the richest in hydrocarbon reserves; it ranks second in gas reserves, gas and crude oil export in the world.

According to reports of the World Bank, the Islamic Republic of Iran has a GDP of approximately $425 billion USD and scores eighteenth in purchasing power parity (PPP) worldwide.

With a domestic market containing more than 80 million inhabitants and planned large-scale government spending, this share is set to increase further.

General incentives and benefits of investment in Iran:

Unique geographical situation at the junction between the Middle East, Europe and Asia.
Huge domestic market with a population of 78 million along with quick access to markets of the neighbouring countries with a combined population of over 300 million people.
A massive resource of efficient, well-trained and economic-friendly workers.
Advanced infrastructure across the country in the fields of telecommunications, energy and rail/road transportation.
Huge energy resources and low production and public service costs.
Suitable climate conditions which allow agricultural activities in all parts of the country and in all seasons.

2. Setting Up a Company in Iran

Registering a company in Iran is one of the best and fastest means of entering its markets.

There are several types of companies that one might seek to register in Iran. Of which, the most popular are the Limited Liability Company (LLC) and the Private Joint Stock Company (PJSC).

You will need to find a reliable and experienced lawyer to register your company as the procedure for registration can be a complicated one.

3. Company or Branch: Which One Should You Choose?

According to laws of Iran, foreign branches can only be used for marketing purposes as well as conducting due diligence, research, data collection and also for liaising between parent companies and Iranian business entities.

A company, on the other hand, is suitable for all business activities in Iran including but not limited to trading; investing; importing & exporting; and manufacturing.

Therefore, it is important to first establish the type of presence you wish to have in Iran before deciding whether to set up a company or establish a branch.

4. Do You Need an Iranian Business Partner?

Generally speaking, it is not mandatory to have a local partner when setting up a presence in Iran.

However, having an Iranian partner or shareholder is required in very limited circumstances such as in Internet Service Provider (ISP) companies. Furthermore, some businesses need an Iranian representative; all importers of cosmetic products, for example, have to appoint a representative in Iran.

According to Taqavinejad, the raised tax levels amount to a 29 percent increase compared to the collected tax income during the same period in 2015.

“In the first quarter of the current Iranian calendar year, nearly 95 percent of predicated tax revenues in the country’s budget plan has been materialized.”

The economic strategy of President Hassan Rouhani has been to significantly reduce the government’s dependency on oil and instead collect tax more systematically.

The Direct Taxes Act of Iran changed in 2016. As such, it is necessary for even those who have worked previously in Iran to refresh their knowledge on how the Iranian tax system works.

Furthermore, there are indirect taxes in Iran which include taxes on imports and Value Added Tax (VAT).

Currently, all companies pay 25% income tax and some of them also pay an additional 9% VAT (depending on the nature of their business). Companies will not be subject to any other taxes on the dividends or partnership profits it received from the capital recipient companies.

It is recommended that a financial advisor is employed in order to avoid tax penalties.

7. What You Need to Know Before Signing a Contract in Iran

Foreign nationals can easily sign a contract in Iran. The Contract Law of Iran-which is incorporated into Iran’s Civil Code-is similar to many other countries in that it is fundamental whether the parties evince an intention to create legal relations. As such, it is possible for the parties to draft their own terms and conditions.

It should also be noted that there is no need to register a contract in a state organisation in order for it to be regarded as valid. Parties’ signatures are enough for this purpose.

It is important to note that during the execution of the contract, the counterparties shall assign their official signatory to execute in order for the contract to be valid and binding.

8. Things to Check Before Signing a Contract in Iran

Check the name, position and address of the counterparty;
Check the dispute resolution method and location;
Check the governing law of the Agreement. Try to choose a system of law which you are familiar with;
Check the effective date and end date of the Agreement;
Check your obligations and financial provisions;
The subject matter of the Agreement should be compatible with Iranian law and Islamic rules.
Some Agreements (such as employment agreements) have certain requirements based on Iran’s body of law and therefore it is better that they are drafted by lawyers.

9. Litigation Procedure in Iran: Is It as Bad as It Looks?

Going through the litigation procedure in Iran is difficult and time consuming.

However, it is not as bad as it may first appear. Judges are usually impartial and if you have enough evidence, you will most likely win the case.

Iran has three-stage legal system consisting of the court of first instance, the appellate court and the high court. Iranian courts are also divided into civil and criminal courts.

In accordance with Article 11 of the Iranian Code of Civil Procedure, the competent court for hearing a civil action is the court located where the defendant domiciles. The legislator has not made any distinction in that respect between foreigners and Iranians.

Save in cases where the parties have agreed on the jurisdiction of a different court in the contract or in a separate agreement, the case shall be heard before the court located where the defendant domiciles.

To file a civil suit, the claimant must first submit his statement of claim and copies of all relevant documents to the registry of the bureau of the First Chamber of the court of first instance in duplicate. If the case consists of multiple defendants, then the number of copies to be made shall equal the number of the defendants plus one.

The President of the First Chamber, who is an important judicial figure, shall refer the file to one of the Chambers of the Civil Court. He is the sole person vested with the power to choose the court that will investigate the case and neither the parties, nor any other authority, can prevail him of this right.

Once the case has been initiated, the designated court shall fix the date and time of the hearing, send a copy of the statement of claim and documents to the defendant(s) and summon the parties for the hearing. If the defendant is domiciled abroad, the date of the notice must be issued at least 2 months prior to the hearing.

10. Is Mediation and Arbitration Applicable in Iran?

Similar to many other countries, the use of Alternative Dispute Resolution (ADR) mechanisms such as mediation, conciliation, and expert determination is allowed and depends on the parties’ agreement. In other words, such dispute resolution methods must be incorporated into the parties’ agreement in order to be imposed upon the disputing parties.

Arbitration, as an ADR technique, also requires the parties’ consent to become compulsory as between them.

However, according to the laws of Iran, there are some specific disputes, such as stock market disputes or employment disputes that must be dealt with at a preliminary stage by mediation or through an arbitration tribunal.