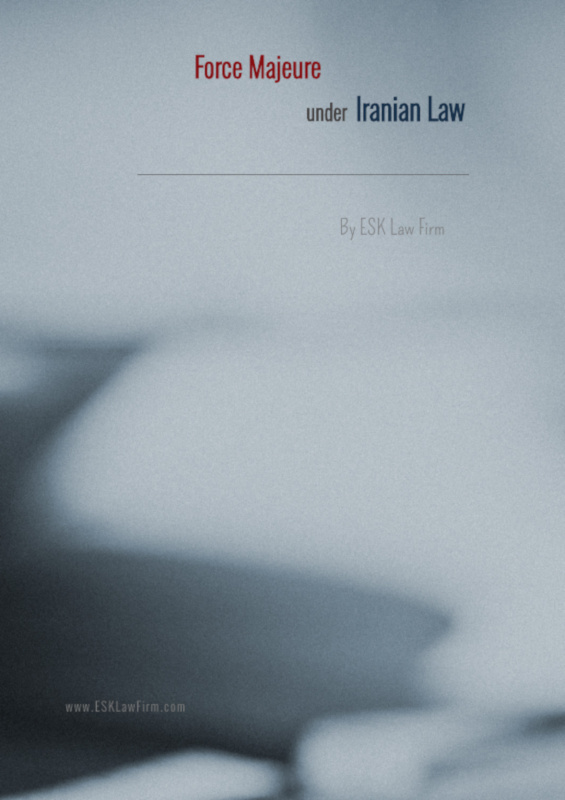 Force majeure is a common clause in contracts that essentially frees both parties from liability or obligation when an extraordinary event or circumstance beyond the control of the parties, such as a war, strike, riot, crime, or an event described by the legal term “act of God” (such as flooding, earthquake, or volcanic eruption), prevents one or both parties from fulfilling their obligations under the contract. Force majeure events normally suspend performance unless the event continues for a long period of time and/or is incapable of remedy by one of the parties in which case the contract comes to an end.

While the Civil Code of Iran does not expressly mention the doctrine of force majeure, it is considered as a valid claim in the Iranian Civil Code (abbrev. IR-CC). Art. 227 and Art. 229 IR-CC contain provisions embodying certain characteristics of force majeure doctrine.

Art. 227 IR-CC provides that a party in breach of a contractual obligation would only be required to pay compensation when it cannot be established that the non-performance was as a result of an external cause that cannot be attributed to the non-performing party. Furthermore, Art. 229 IR-CC states that if a party becomes unable to carry out any duty or obligation due to an event that the affected party cannot avoid, then the party will not be held liable to pay compensation to the other party for any loss or damages.

As a result, under Iranian law, force majeure requires to be (i) an unavoidable event (ii) that could not be foreseen by the parties and (iii) that is outside of their control. This is largely in line with the international understanding of “force majeure”.

A force majeure clause is a provision in a contract that allows the parties to suspend or terminate a contract when certain circumstances outside of their control make performance of the contract impossible or impractical to perform. However, Force majeure and its requirements are not related to “public order” and not considered as mandatory rules under Iranian law. Therefore, contracting parties can change its requirements or totally remove its effects in their contracts.

4. What Happens When There is No Force Majeure Clause?

Not all contracts include a force majeure clause or the clause may not be wide enough to include all situations outside of the parties’ control. In those instances, a contracting party must prove in a court or arbitration that a contract becomes impossible as a result of a major unforeseen event to release from performing his obligations under the contract.

Article 30 of the Labor Law of Iran states:

“If , due to Force Majeure (earthquake, flood, etc.) or Unforeseen events (such as war) a working site shut down and its workers are unemployed, after the reinstatement of the working site, the employer is required to bring back unemployed workers to the rebuilt sit and to the jobs created in it.”

Therefore, the initial effect of a force majeure event in labor contracts is suspension of works and employer has a duty to bring back his employees to work after the effects of force majeure have been removed. In case of permanent force majeure, the termination of employment contracts may be possible subject to certain conditions.

International sanctions arguably are not likely to be considered as a case of force majeure under the Iranian legal system. Under the Joint Comprehensive Plan of Action (known commonly as the Iran nuclear deal or Iran deal), the sanctions will come back into force if Iran fails to comply with its obligations. Moreover, the long-standing hostile relationship of Iran and the United states made the reimposition of sanctions predictable.

Even if the international contracts be concluded before imposing the first round of UN sanctions in December 2006 and therefore the foreign party refers that the sanctions was not predictable at the time of conclusion of the contract, the sanctions still cannot be regarded as a case of force majeure because of non-existence of the other element which is “irresistibility”. However, there are various approaches to the principle of foreseeability and irresistibility depending on the circumstances as well as on terms and conditions of the contract. This could provide the space to develop alternative arguments that are more favorable to foreign parties involved in such disputes. It is advisable when a foreign partner could not fulfil its commitment due to the consequences of the international sanctions, inform the Iranian partner instantly and both parties try to solve the problem through amicable negotiation and find other alternatives.

7. Use Force Majeure to Protect Your Business

It is not possible to fully benefit from force majeure if you have not explicitly provided for it in an agreement. To avoid long and costly litigations to prove occurrence of a force majeure event, it is not enough simply to state that “X Company will be excused from performance of its obligations under the agreement if an event of force majeure occurs”. Instead, it is vital to define what you intend force majeure to mean. It is recommended to seek legal advice in draft of a force majeure clause in your contracts to protect your business.