Iran and Its Untold Opportunities-2 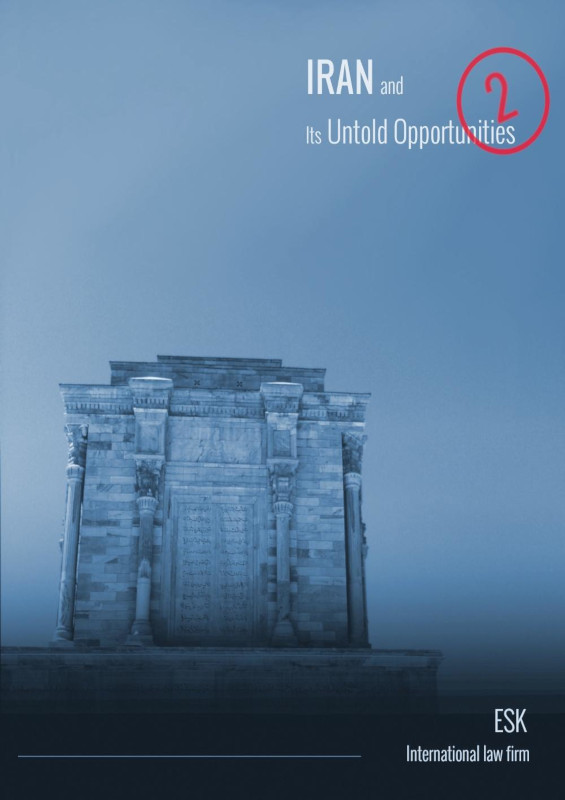 Iran and Its Untold Opportunities-2

1. Evaluation of Land and Agricultural Opportunities

“Besides the rapid population growth over the past few decades, water scarcity and soil degradation have intensified the challenges faced by the Iranian agriculture sector to ensure food security over the long term. Despite its paramount importance, the extent to which the land and water resources of Iran can meet the nation’s future food demand is not well understood. Herein, we systematically evaluated the capacity of Iran’s land for sustainable agriculture based on the soil properties, topography, and climate conditions relevant to crop production. 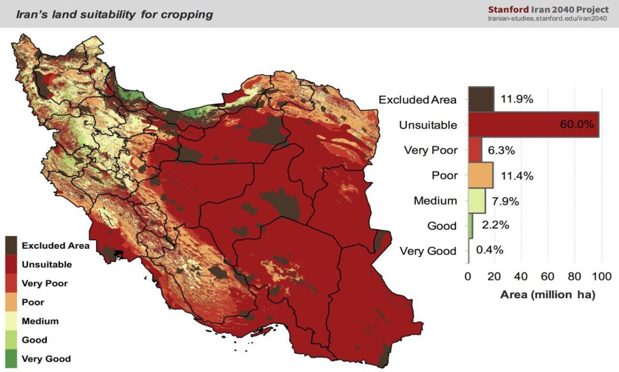 “Our analysis also revealed that 30%, 5%, and 17% of the current agricultural lands (cultivated and uncultivated) are located in poor, very poor, and unsuitable areas, respectively. Cultivation in very poor or unsuitable lands can be partially avoided as there exist unused lands with at least a medium level of suitability for substitution that can improve the overall sustainability of the agriculture sector in Iran. Our estimation of the proportion of unused lands within each suitability classes shows that almost all available lands with high suitability have been exploited for agriculture, but there exist about 4.2 million ha of medium quality lands, mostly located in western Iran, for future expansion. However, only a small portion of these unused lands can be practically deployed for agriculture because of their low spatial connectivity and limited accessibility.” However, based on the recent year’s expansion rate of road construction and development rate of infrastructure, it can be estimated that low spatial connectivity and limited accessibility would not be a long-term obstacle.

“The insufficiency of water resources has long been realized as a major impediment to developing a productive agriculture in Iran” which would be an opportunity for any entrepreneur who can see the potential that lies ahead because:

“1- On top of the well-known water limitations, land resources also pose significant barriers to the sustainable development of agriculture in Iran.

2- A sizeable acreage of farmlands occurs in unsuitable and very poor suitability ranks. The production from these lands not only is low but also can cause environmental damage and hence subject to further decline in the future.

3- Land expansion is unlikely to add significantly to Iran’s food production capacity. However, redistribution of lands from lower suitability ranks to more suitable lands can somewhat improve the overall sustainability of Iran’s agriculture.

4- Increased food production capacity can be achieved through adoption of certain modern agricultural practices (e.g. greenhouse farming) in areas where land suitability is not necessarily high.”

5- As it is shown in the below diagram, Iran’s population has been doubled since 1980 and obviously this doubled population needs more food and more food means a developed agriculture industry which requires big investments and high technologies.

2. An Outlook for Natural Gas, Electricity, and Renewable Energy in Iran

The outlook for Iran’s natural gas production and market demand are discussed firstly “and then economic opportunity losses caused by suboptimal allocation of natural gas to various end uses [is quantified]. Subsequently, based on the projections made for individual consuming sectors, we forecast Iran’s future demand for electricity. Finally, we put the potential of renewable energy in Iran into context by comparing its future viability against other power capacity expansion scenarios, i.e., upgrading the existing gas-fired power plants and the addition of new units”

“Stemming from the development of supergiant South Pars gas field, Iran’s natural gas industry has shifted to a new paradigm: since 2000, production has increased from 230 to 750 million cubic meters per day (mcm/d) and is likely to rise to 920 mcm/d by 2020 and 1,150 mcm/d by 2040. The envisioned drastic drop in the growth of production beyond 2021 is attributed to the smaller capacity of future Greenfield projects and the expected decline in production of the existing fields-particularly the South Pars field itself. Besides demographic drivers, factors contributing to the soaring demand for natural gas include the displacement of liquid fuels by natural gas for space heating and electricity generation and the development of petrochemical plants and energy-intensive industries. During this time, the amount of gas left for reinjection into mature oil fields has remained flat and the net trade of gas has been zero or negative. Although Iran’s total gas exports (to Turkey, Iraq, Oman, and Armenia) may reach 100 mcm/d levels within the next five years, further expansion of export capacity seems infeasible. Within the domestic market, the largest growth in natural gas demand will come from petrochemical and other industries and from the power sector.

“The Iranian government manages the demand for natural gas by setting sector-specific prices and quotas, with prices decided annually while the quotas are often adjusted dynamically. The mismatch between the selling price and allocation priority suggests that the demand structure for natural gas (hence the total revenue) could have been vastly different had the price elasticities of different uses been factored into the pricing models. This discrepancy highlights the urgency for the country to accelerate energy price reforms and develop a competitive market for supplying natural gas to the large buyers (e.g., petrochemical plants).”

“Since 1990, Iran’s power generation capacity has expanded at an average rate of 2.4 GW/y to meet the average gross demand growth of 9.1 TWh/y. With a share of 85%, the sector relies heavily on natural gas as the primary source of energy, while shares of liquid fuels and hydropower in 2016 were 9% and 5%, respectively. Our analysis shows that Iran’s electricity demand growth will likely decline from 6.8 to 3.8 TWh/y by 2040, reducing the need for annual capacity addition from 3.0 to 1.3 GW. Upgrading the existing power plants will add 10 GW capacity at a levelized cost of less than 1 ¢/kWh; the levelized cost of marginal electricity generation by combined cycle plants ranges from 1.5 to 6.3 ¢/kWh depending on the opportunity cost of natural gas. We also show that, with a future levelized cost of approximately 4 ¢/kWh, publicly funded utility-scale renewable energy (solar and wind) will become economically viable only if the selling price of displaced gas exceeds $150,000/mcm. Currently, the only uses of natural gas that satisfy this threshold requirement are transportation with compressed natural gas (CNG), gas export, and reinjection into oil fields. While gas export and reinjection have some growth potentials, the market for CNG vehicles seems to have become saturated. Hence, any further expansion would require a market stimulus such as an increase in the domestic price of gasoline. At the current selling price for natural gas, investment in renewable energy with the objective of making more gas available to boost production from the petrochemical industry is not economically viable.

There can be a good (if not great) opportunity to invest in renewable energy in Iran; “To evaluate the viability of renewables we assumed two capital source scenarios:

¢ Publicly funded projects. Assuming that the Iranian government provides the capital for both types of power generation projects, large-scale renewable power projects will generate electricity at a levelized cost of 3 to 4 ¢/kWh, whereas LCOE from new combined cycle plants in Iran will range from 1.5 to 6.3 ¢/kWh depending on the best opportunity available for an alternative use of natural gas. Despite the promising levelized costs offered by renewable energy plants, their overnight capital costs per unit of actual power capacity ($3,700 to $5,900/kWa) are significantly higher than those of gas-fired power

plants (about $1,000/kWa), posing a major barrier to their development in Iran, where public funds are currently very scarce. Nevertheless, if the economy allows for such investments in the future, the large-scale renewable energy projects will be feasible only if the alternative use of the unused natural gas can be sold at, or results in an avoided cost of, $150,000/mcm or higher. Currently, using natural gas for CNG fleets, for export to neighboring countries, and for reinjection into mature oil fields for improved recovery (although subject to some uncertainties) satisfies this condition.

¢ Privately funded projects. Assuming a required return rate of 20%, the private sector would need a minimum PPA of 7 to 14 ¢/kWh in order to consider investing in renewable energy in Iran. With the same required rate of return of 20%), the levelized cost of electricity generation (excluding fuel costs) from a gas-fired combined cycle power plant will be close to 2.8 ¢/kWh. Therefore, for a privately funded renewable energy project, the economic return (or the implied avoided cost) from the alternative uses of the displaced natural gas should exceed $200,000 to $550,000/mcm in order to justify a premium sum of 4.2 to 11.2 ¢/kWh for renewable electricity.

Based on the abovementioned analysis and considering the actual revenues (or avoided costs) associated with different end uses for natural gas, we conclude that utilization of renewable energy will be a viable option only in specific cases as outlined” below: